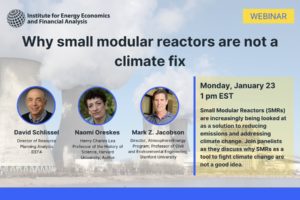 From the Institute for Energy Economics and Financial Analysis:

Small Modular Reactors (SMRs) are increasingly being looked at as a solution to reducing emissions and addressing climate change. Yet like most nuclear power projects, SMRs have a history of significant cost over-runs and years-long schedule delays.

Join IEEFA analyst David Schlissel, Mark Jacobson from Stanford, and Naomi Oreskes from Harvard as they discuss why SMRs as a tool to fight climate change is not a good idea. Register here today.

DISCLAIMER: Links are provided for relevance of the information they contain. Images displayed in links external to this website are not an expression of NRWC support for sexism, ableism, transphobia, classism, racism, ageism, religious prejudice or other forms of oppression. NRWC embraces the principles of Environmental Justice and the Jemez Principles. TRIGGER WARNING: Some materials may be disturbing and/or traumatizing to some viewers. NRWC strives to provide a “Trigger Warning” for materials that may be triggering. Please e-mail nrwcmedia[at]gmail.com if you have any questions or concerns about any content on this site or any shared materials or links.